Husband and Wife Go to Jail for IRS Audit Coverup

“I’m Going to Send You to Prison…” 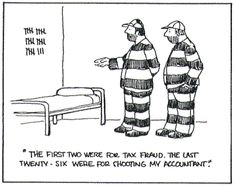 Dr. Jeffrey Stein, prominent vascular surgeon, and his wife Marla Stain stood before Manhattan Federal Court Judge Denise Cote. “You’re two people who have great talent, who’ve been very successful in life, who I am going to send to prison,” Judge Cote said, just before handing down the Stein’s sentence

Now both of the Steins will serve jail time in Federal prison for cheating the IRS. Dr. Stein, a vascular surgeon, was sentenced to 18 months while Marla Stein, a personal injury lawyer, was sentenced to a year plus one day. The Steins were also ordered to pay restitution to the IRS in the aggregate amount of $344,989. In addition to jail time and fines, Marla Stein will probably lose her law license and Jeffrey Stein may face suspension of his medical license.

What Ticked Off the IRS

The couple conspired to lower their tax burden by providing “false and fictitious information” to their accountant. They generated fake deductions to offset actual business income and, when their returns were flagged by IRS for audit, the Steins engaged in even more fraud by making up documentation – like fake invoices – to support the fake deductions.

The IRS Special Agent in charge made a point of noting that the Steins had doubled down on their fraud after they had been caught, and that “falsifying books and records ‘after the fact,’ in preparation for a tax audit, is also a criminal offense and will be dealt with accordingly.”

Lesson to Be Learned

The IRS typically does not recommend citizens for prosecution based merely on bogus deductions. The real wrong here was the Stein’s actions after receiving the audit notice, and not the original concerns that led to audit.

Here is the lesson for the Steins and anyone else facing a problem with the IRS. If you have an IRS problem, do not make the problem worse by engaging in more shenanigans. IRS problems can be solved, even bad ones.

I have little doubt that had the Steins hired an experienced Tax Attorney when they received the original notice, instead of engaging in a cover up, that they would not have face jail time, and probably no criminal charges either. I’ve had some very serious cases walk into my office and yet my clients came clean and we cleaned the mess up. The IRS got paid. No one went to jail. Everybody was happy.

If you’re worried about an IRS audit or any IRS or State tax problem, relax. If you call me, I’ll give you an intial tax analysis for free, and hopefully ease your mind.