The Difference Between a Lien “Release” and a Lien “Withdrawal”

When a lien is released, it no longer encumbers title to the property. Federal tax liens are released when the tax liability is paid or settled. A lien also has an expiration date that is found on the face of the lien. Yet, when the IRS releases a tax lien, the citizen’s credit report still shows a tax lien with a “-0-” balance. That’s a negative narrative that remains on credit reports for seven years from the release date, and it will lower the taxpayer’s credit score as long as it’s reported.

When a lien is withdrawn by the IRS, it’s as if the lien never happened in the first place. The lien no longer affects title to property and by operation of federal law, the lien is deleted from all three credit reports—Experian, Trans Union, and Equifax. If it all possible, it’s better to withdraw the lien rather than release it. So with this in mind, let’s discuss the reasons a lien might be withdrawn.

Code §6323(j) gives the IRS the authority to withdraw a federal tax lien even without paying the lien. If any one or more of these reasons apply, then the IRS is required to withdraw the lien as if it never happened in the first place:

REASON #1: The lien was premature or not in accordance with IRS procedures.

REASON #2: The taxpayer entered into an installment agreement and the agreement did not authorize a tax lien.

REASON #3: Withdrawal of the lien will facilitate collection of the tax.

REASON #4: Withdrawal of the lien is in the best interest of the taxpayer and IRS.

If only one reason of the four above applies, the lien must be withdrawn, and yet often more than one reason can be successfully argued. If you cannot get the lien withdrawn, then the next best thing is to get it released. We discuss some examples of getting a lien withdrawn or released below.

How to Get a Tax Lien Withdrawn or Released

The Tax Lien Was Filed In Error. This is where reason #1 above applies. It happens. The IRS screws up by violating collection procedures mandated by the Internal Revenue Manual. One example of an IRS screw-up is when the required “Notice of Tax Lien” was not mailed before the lien was filed. Another example is when the lien is filed contrary to an agreement between the taxpayer and the IRS.

When the IRS agrees to withdraw the lien due to its own error, this should be accomplished with as much fanfare as the lien was filed. The certificate of release should clearly state the lien was filed in error. The lien should be deleted from all three credit reports. You can even provide the IRS with the names and addresses of companies and people you want notified of the mistake. See Code §6326(b). 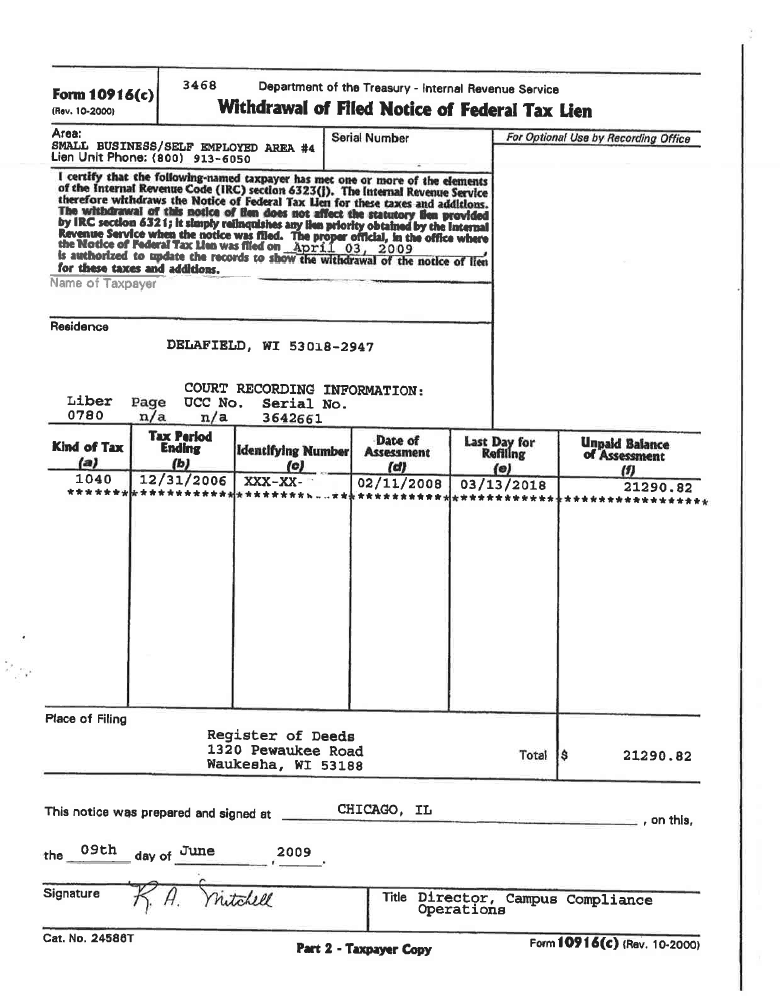 Enter into an Installment Agreement Where as a Condition the Lien is Withdrawn. This applies exclusively to reason #2 above. You negotiate that the IRS withdraw the tax lien by entering into an installment agreement for you to pay the tax in full. The amount owed must be $50,000 or less, and you must agree to direct debit from your bank account.

TIP: You may still qualify for an installment agreement where the lien is withdrawn even if you currently owe over $50,000. Here’s why: the IRS calculates the $50,000 limit excluding interest and penalties. The master tax file will tell you if you qualify.

Offer in Compromise. If you reach an offer in compromise agreement with the IRS, the IRS should be required to withdraw the tax lien upon payment of the offer. This falls under #3 and #4 above because the accepted offer will facilitate the collection of the tax and is in the best interests of both the taxpayer and the government.

Lien Subordination. The citizen obtains financing of real estate, and the IRS permits the lender to “step over” the lien position in exchange for payment to the government. The goal is to get the tax lien withdrawn, not simply released. This also falls under reasons #3 and #4.

Sale of Property. The sale of real estate could pay the tax, or a substantial portion of it, and yet the tax lien prevents the sale. You work a deal to get the IRS to withdraw the tax lien under reasons #3 and #4 above. Code section 6325(a)(2) authorizes the IRS to release a tax lien within 30 days of being provided with a bond for the tax.

Property Double the Amount of the Tax. For example, you own three properties each worth $100,000, totaling $300,000. The IRS attaches a tax lien against all three properties even though the tax due is only $100,000. Under code section 6325(b)(1) the IRS may discharge or release a portion of the property subject to the lien if the fair market value of the property remaining subject to the lien is at least double the sum of the amount of the unsatisfied liability. Reasons #3 and #4 apply here.

File Bankruptcy Under Chapter 7. Bankruptcy may eliminate the tax debt but will not eliminate the lien. However, go back to the reasons above, and make an argument that one or more may apply. Attempt to settle the tax liability for pennies on the dollar and as part of the deal, the IRS withdraws the lien.

The Statute of Limitations Expires.  On the face of the tax lien is an expiration date. By allowing the lien to extinguish itself, you will not get the lien withdrawn, but it will be released.

Don’t Take “No” For An Answer!

If you can’t get a deal done on the first try, it’s far from over. You have the following tried and tested methods that frequently force the IRS to reverse its decisions:

Have Questions on IRS Liens or Need Tax Lien Help? Contact Us Today.